Prime Minister Xavier Bettel, in his role as Minister for Communications and Media, gave an enthusiastic address to the region’s IT decision-makers at Golden-i 2014 where Clearstream Services IT sponsored the awards ceremony. 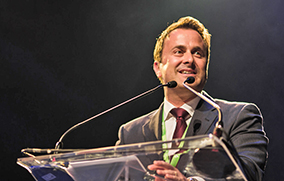 Mr Bettel wholeheartedly supports the future economic development of IT in Luxembourg, stating clearly that IT has an important place in the Grand Duchy and that the country must take a strong role in the industry.

This year’s event attracted 720 visitors to this annual gathering of IT professionals in Luxembourg, and was followed by a networking cocktail.

Find out who the IT community nominated as winners of CIO of the year, the EuroCloud Luxembourg Awards and the Flagship Award for ICT here: http://www.goldeni.lu/#palm2013

To find out more about how Clearstream Services can host and run your IT systems, please visit our dedicated web area.