2. Waiving of holding restriction on non-exempt beneficial owners imposed by Article 17 of DL 193/2005. Under Law 83/2013 all types of beneficial owners may hold Portuguese domestic debt securities with Clearstream Banking.

3. It covers all Portuguese debt securities, integrated in a centralised system managed by:

This special regime covers all debt securities, regardless of the currency in which they are issued, including those of a monetary nature (that is, whose term is less than or equal to one year), namely:

4. The withholding/reimbursement tax on settlement transactions does not apply to Clearstream Banking being recognised as ICSDs by the Portuguese legislation (but remain applicable to CSD participants). If the securities are delivered from an ICSD to another entity that is not an ICSD, any withholding tax due must be reclaimed directly via the Portuguese Tax Authorities (the “PTA”) through the procedures for the reclaim for refund of Portuguese tax withheld on accrued interest at the date of the transfer of the securities described hereinafter.

5. The duties defined under this special tax regime must be performed by the direct registering entity resident in Portugal or a representative entity (except for those contained in Article 11 of the Special Regime, Article 119 and no  1 of Article 125 of the Personal Income Tax (PIT) Code that shall not apply to securities subject to the rules set forth in the Article 17 of DL 193/2005).
The representative entity is a resident entity in the Portuguese territory designated pursuant to no 2 of Article 125 of the PIT Code, by the Direct Registering Entity who is not considered resident in Portugal or has not a permanent establishment situated therein, or by the entity that manages the International Settlement System.

6. To be tax exempt at source, the disclosure is not required for the Non-Resident Exempt beneficial owners.
On each coupon payment date or redemption date, the ICSD must report to the Direct Registering Entity or to the Representative the following information:

The availability for tax relief varies according to the applicable Portuguese legislation, as follows:

The type of tax relief (full/partial) varies according to the residence and status of the final beneficial owner, as follows:

Click on the image to view the diagram showing the availability of relief at source and/or quick reclaim of withholding tax on income from Portuguese domestic Bonds subject to Law 83/2013 clarified by Circular Letter 4/2014. 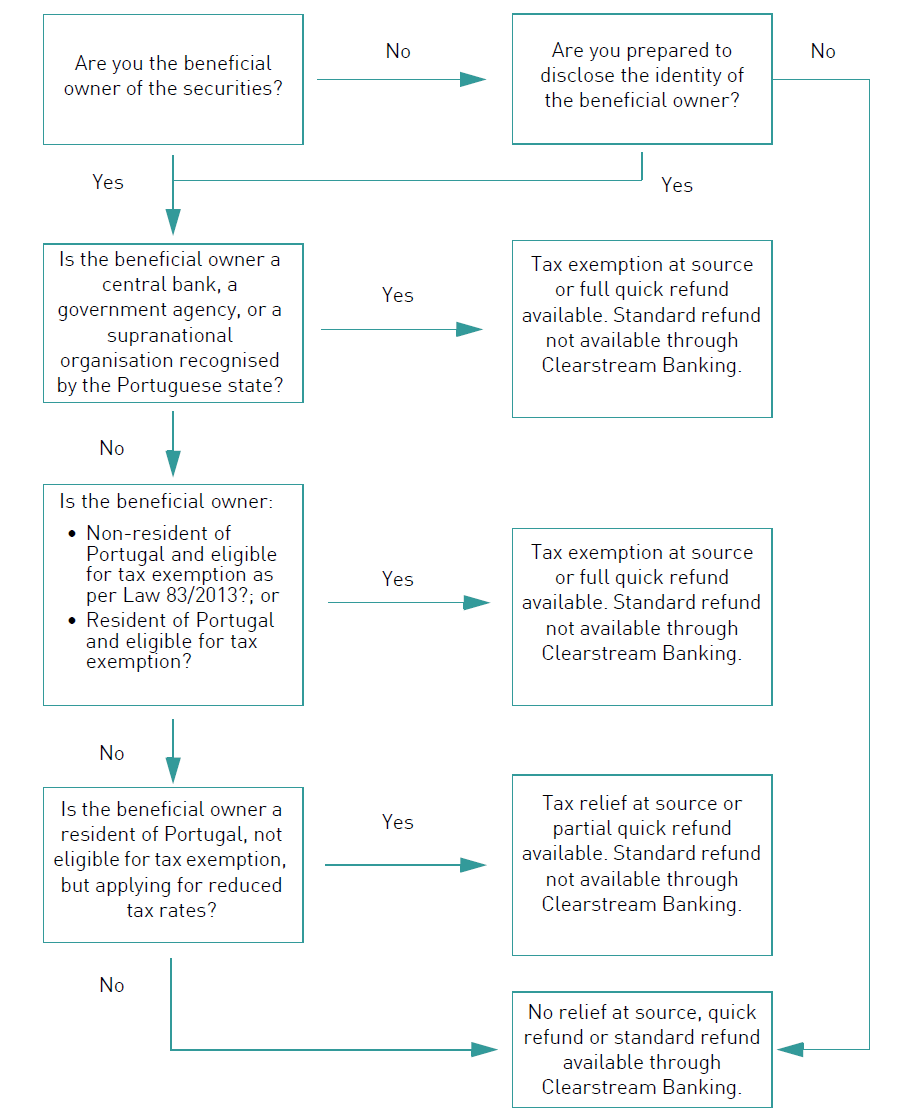 Full/partial relief at source of withholding tax is available only if the appropriate documentation is submitted to Clearstream Banking.

A full/partial quick refund is available if a full immediate refund has not been obtained by the eligible beneficial owner.

Standard refund is not available through Clearstream Banking.