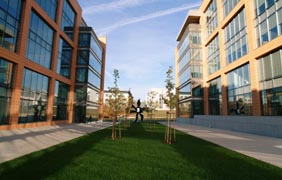 The Luxembourg-based home of Clearstream reflects – perhaps even more so than the other locations of Deutsche Börse Group – the internationality of the Group, with a broad variety of nationalities working in one location.

In typical Group fashion the new office buildings, named “The Square”, are light, spacious and open-plan, encouraging communication and interaction among employees. The architectural style and furnishing is in line with the corporate design. As part of corporate culture, the art collection “XL Photography” has also been extended to Luxembourg, with a number of contemporary art works exhibited for the benefit of both employees and visitors.

However, “The Square” also represents the individuality of the company: large glass fronts team up with terracotta here. In line with the motto of modernity and innovation in which the buildings were constructed, a centralized recycling system has also been implemented.

The Clearstream headquarters is located in the emerging business and financial center Kirchberg. The staff restaurant in “The Square” offers a broad range of dishes and the large shopping mall just opposite the front entrance makes for a nice change of scenery at lunch time.

The City of Luxembourg

The city of Luxembourg with 80,000 inhabitants, is the largest municipality of the Grand Duchy that borders on Germany, Belgium and France. Besides German, the official languages in the internationally renowned financial metropolis are French and Luxembourgish. In 1994, the city of Luxembourg was declared a world heritage site by UNESCO.

The old town around the original fortress has been almost fully preserved. With its numerous bars, cafés and restaurants it is the ideal place to while away the hours. The green areas in the valleys of the city are supplemented by a spacious park around the center towards the west; they are frequently described as the 'green lungs of the city'.

What’s more, Luxembourg currently has the highest gross national product of all member states of the Organization for Economic Cooperation and Development. 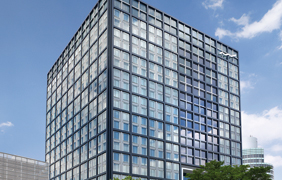 Deutsche Börse Group has three office buildings in the Frankfurt area: in the city of Eschborn, located just outside Frankfurt’s city limits, in “Industriehof” in the Hausen district of Frankfurt and at Börsenplatz in Frankfurt’s city centre. The headquarters of Deutsche Börse Group are located in Eschborn, accommodating the majority of employees. The vaults and data centre are based in Hausen with a staff of approximately 80, and about ten employees work at Börsenplatz.

The new Deutsche Börse Group headquarters are located approximately seven kilometers from the centre of Frankfurt at Mergenthalerallee 61 in Eschborn.

The 21-story building is about 90 metres high and consists of two L-shaped towers which are linked by eleven walkways and eight bridges and is entirely encased in a glass façade.

In the Group headquarters employees mainly work in open-plan team rooms. A variety of conference rooms on different floors are suitable for smaller and larger meetings. The offices are modern, highly flexible units and almost floor-to-ceiling windows allow light to penetrate deep inside. The large foyer forms the heart of the building and is a place of communication and the stage for a variety of events.

The building has been constructed to the highest ecological standards to meet stringent specifications both for staff comfort and building design. For example an integrated combined heat and power unit provides up to 30 percent of electricity requirements.

Photographs from the Art Collection Deutsche Börse offer inspiration and add an individual note to the building’s interior. Large-format works of German and international artists were compiled for the collection. An extensive art terrace offers the perfect setting for special exhibitions.

In addition to multi-story car park and underground parking facilities, the new building has a spacious staff restaurant with an area of 2,000 m².

“The Cube” is situated within sight of the autobahn A66 and is easily accessible either by car or by public transport. It is only a ten-minute walk from the suburban train station (S-Bahn) Eschborn-Süd. Also, in the morning and evening there is a free bus which operates between the S-Bahn station and Mergenthalerallee.

The city of Frankfurt

Given its convenient location almost in the centre of Germany, Frankfurt/Main has enjoyed nationwide importance for centuries. Where once the Franconians created a ford over the river Main, important trading paths have crossed here ever since and contributed to the steady increase in the economic strength of the city, situated in the south of the German federal state of Hesse. The role played by bridges in the past has since been taken over by the runways of the central Rhine-Main airport – with more than 50 million passengers per year it is the second largest in Europe – and by the eight lanes of the adjacent autobahn junction. The Frankfurt Trade Fair is also operates globally; incidentally, it is the oldest in the world. During the book fair, music fair or automotive show: the city on the Main attracts up to 2.7 million trade fair visitors in peak years.

Today, almost 300 banks, around half of which are foreign and including Deutsche Bundesbank, and since 1998 the European Central Bank (ECB) control the flow of money from here. With 600,000 jobs, Frankfurt has almost as many employees as residents (670,000).

International and multilingual dimensions are part of daily life. After all, one in three Frankfurt inhabitants does not originate from Germany. Deutsche Börse Group works globally but the majority of its employees live where they work: in greater Frankfurt/Main. 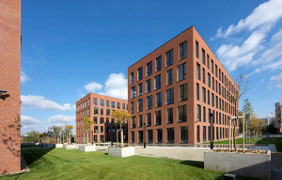 The Prague Deutsche Börse Services s.r.o. staff work on the development and maintenance of Deutsche Börse Group’s IT systems, focusing on the areas trading, clearing and settlement. Staff work in close cooperation with colleagues from the Group’s other main locations. In fact, the specialized development teams are frequently cross-border entities made up of employees from various locations. The projects thereby profit from the strong network between the Group locations in Prague, Frankfurt and Luxembourg.

Clearstream Operations Prague mainly focuses on back office operations for the Custody and Settlement area.

Deutsche Börse Services s.r.o. and Clearstream Operations Prague occupy offices in Prague’s Karlin 8 district. At present, more than 400 staff members from both companies work in Prague. Until 2013, the location will continue to grow with the ongoing transfer of staff and the creation of new jobs. Prague will then be Deutsche Börse Group’s third largest hub after Frankfurt and Luxembourg.

The new office building “Futurama Business Park” is situated in Prague’s Karlin district. The new building is close to the underground station Invalidovna. A number of shops, restaurants and hotels are nearby.

The Futurama project is an integral part of the development of the municipal district of Karlin, which has attracted a number of Czech and international companies.

The city of Prague

The “Golden City” developed from a thirteenth century fortified settlement on the Vlatva River into the multicultural capital of a modern Eastern European state. Today, more than one million people live in Prague – over ten percent of the Czech Republic’s total population. As one of Central Europe’s oldest and largest cities, Prague is an important European hub and business centre.

A wide variety of well-preserved historic buildings reflect the town’s cultural diversity and turbulent history. The city centre follows the Vlatva’s curve and offers impressive views with its towers, domes and 16 bridges. Among the city’s cultural landmarks is central Europe’s oldest university, Charles University, founded in 1348. In 1992, the historic centre of Prague was listed as a UNESCO World Heritage Site.

Since merchants first settled there in the Middle Ages, Prague has evolved into the economic centre of the country as well as becoming an established European metropolis. 1989 saw the Velvet Revolution in the streets of Prague, heralding the end of the socialist regime. In 1993, after the split of Czechoslovakia, Prague became the capital of the new Czech Republic. Today, it is a favoured location for the film industry. Manufacturing is also an important pillar of the economy, as is tourism – Prague is one of Europe’s most visited cities. The wide range of cultural activities and a mix of heritage, history and modern life make the city attractive to both international companies and individuals from all over the world.